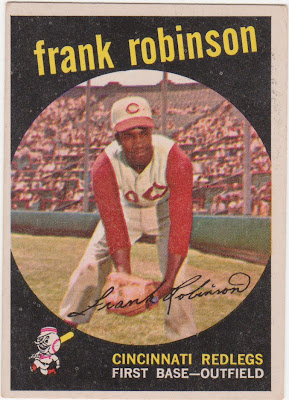 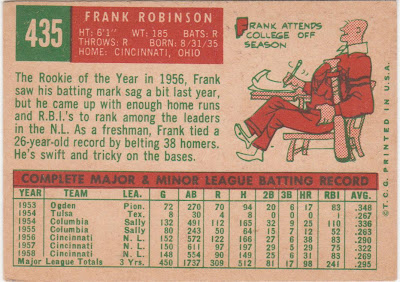 I'm in a slump. I had built up a backlog of entries that lasted over three weeks but now they are down to just a couple. I'm sure a lot of bloggers hit a wall from time to time. This is my time.

So I decided that the very best way to get out of a slump and maybe grab a flicker of inspiration would be with a card of a player that ranks, along with Brooks Robinson and Eddie Murray, as one of my very favorites. And so here he is.

Frank Robinson might not have had the all-around talent of Willie Mays, the flash of Roberto Clemente, the charisma of Mickey Mantle or the power of Hank Aaron. But of the players I've watched in my lifetime, I believe Frank did as much to help his team, on the field and in the clubhouse, as any player in the sport. He played the game hard and well, every day. He knew his opponents, inspired his teammates and studied the game.

Frank's accomplishments are many and well known. NL Rookie of the Year, MVP in both leagues, 14 times an All-Star, two time World Champion, Triple Crown winner, Hickok Belt winner, Presidential Medal of Freedom Award winner, MLB's first African-American manager, AL Manager of the Year winner and first ballot Hall of Famer, etc, etc. Plus, on the field, he was a badass 110%-er. He'd hold that bat straight up, lean over the plate and dare you to throw inside.

In 1969 I went with a buddy, also an Oriole fan, to see the O's play at Yankee Stadium on a mid-week afternoon. We'd decided that we'd make a couple of banners to support our club. We set to work dividing an old bed sheet and, with orange paint and a marker, we each created a work of art. His was the number '5' for Brooks Robinson. Mine was a '20' in orange with 'RF' added on.

We missed the Orioles' batting practice session but we hung out near the third base dugout in hopes the players would see our signs when they warmed up. Then a batboy approached me and asked if I would like him to take my banner to Frank in the clubhouse and show it to him. I said 'Sure' and handed it to him not knowing if I'd see it again. Moments later here comes my banner up the dugout steps being carried by Frank Robinson himself. He asked whose it was and brought it over to me and thanked me for bringing it. He asked for my pen and signed it right in the middle of the '0'. 42 years later I still have it. It's discolored and been stained a bit along the way, the orange color had darkened to a pinkish red and the autograph has faded some. But that banner still means more to me than any piece of memorabilia I own. 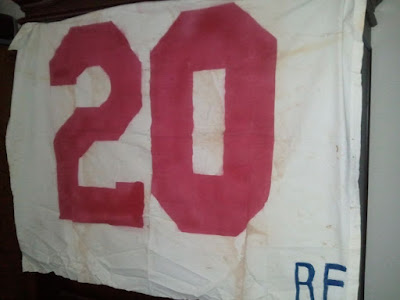 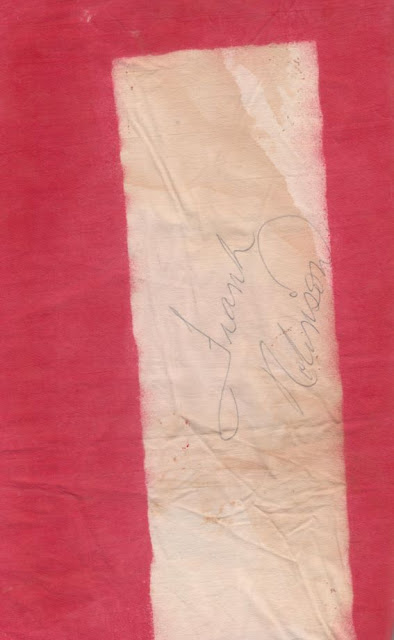 I met Frank again a few years later in the Astrodome when he was playing for the Dodgers and that's another unusual story. My college group of friends and I were there to watch our University of Houston Cougars take on Arizona State. The game started at about 10 or 11 a.m. because the Dodgers were scheduled to play the Astros that night. It was the first two-sport doubleheader in the Dome IIRC and quite a lot was made of it that week. At one point someone said that he thought the guys behind us were the Dodgers. I turned around and the first person I saw was Frank Robinson in an aisle seat almost directly behind me. I asked him to sign my program and attempted some clever small talk along the lines of the O's needing him for their pennant race. He said they'd do fine. Turned out I was right, he was wrong. The O's, who were within a game or two of first finished five back in their division. BTW, we stayed for the late starting Astro-Dodger game which the Bums won. Frank didn't play.

I love everything about the '59 Robinson card....the black frame, Mr. Redlegs logo, the "ballplayer as student" cartoon. But mostly I love it because it's Frank Robinson.
Posted by Commishbob at 7:40 AM