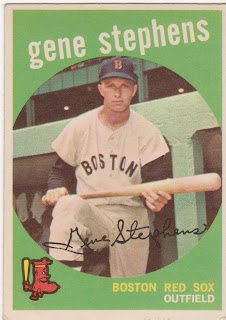 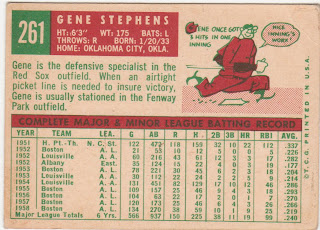 OK, it was just a throw away line on Gene Stephens' Wikipedia page:

On June 18, 1953 Stephens became the first major leaguer in the modern era (since 1900) to have 3 hits in a single inning. The record was matched in 2004 by Johnny Damon, who coincidently also accomplished this feat as a Red Sox as well.

I mulled that over for a few seconds, impressed. Then I looked closer and saw the same info is part on his cardback cartoon. Then It dawned on me.... they batted around...twice! Wow! I gotta check that out. I did and I was pretty amazed/amused.

Tiger righty Steve Gromeck took most of the pounding. He'd been a Tiger for just three days after being acquired from the Indians on June 15! I wonder what Tiger management was thinking as that inning ended. Gromeck entered the game with a 3.27 ERA and exited with 9.75. LOL

Stephens was a fourth outfielder and defensive caddy for Ted Williams for the bulk of his career. He broke in with the Red Sox in 1952 and stuck with the big club beginning in '55. In 1960 he was traded to the Orioles and then spent pieces of the next three seasons with the White Sox and A's. After a minor league stint in 1967 Stephens hung up his glove for good.

He finished with a .240 batting average and 34 homers as well as a feature role in that amazing 1953 game. A very far reaching interview and bio of Stephens is available here.

Interesting that fellow Red Sox outfielder Johnny Damon is the only other player since 1900 that has three hits in an inning. He pulled it off on June 27, 2003. Waaay back in 1883 three Chicago White Stockings players, Tom Burns, Ned Williamson and Fred Pfeffer all (yes, all) had three hits in the same inning. But those guys were playing rounders back then. I don't know how that record even was recorded.

You gotta like the Stephens '59 card. Gene poses on the dugout steps in Yankee Stadium, green frame matching the green (peeling) paint of the ballpark. Gene showing off his bat. Not a typical pose.
Posted by Commishbob at 8:49 AM