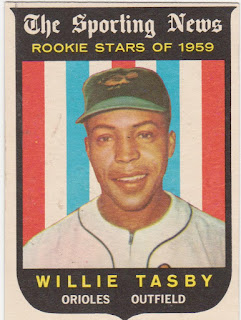 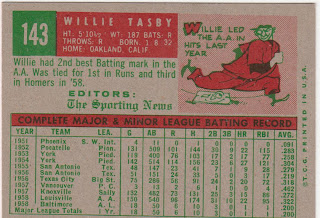 After a trial run the year before Oriole rookie Willie Tasby grabbed the centerfield job in Memorial Stadium in 1959 and hit .250 with 13 homers. In 1960 the Birds, with their 'Baby Bird' pitching staff had thoughts of contention and decided that Tasby's slow start wasn't going to help and he was traded off to the Red Sox.
Tasby hit .281 in finishing out the year in Boston and then was drafted by the Senators in the expansion draft for 1961. While he hit only .251 for the Nats he racked up career highs in homers (17) and RBIs (63).
Another slow start the following season earned him a ticket to Cleveland where he played out his brief career as a part time outfielder. He played the '64 campaign in the Indians farm system and then retired.
Tasby is at the center of a funny story about playing ball in a storm in Baltimore. I cant tell the story any better than it was told on the Roar From 34 blog. Recommended reading.
My '59 Tasby is an upgraded from the one I had in my O's team collection and is in really great shape. The scanner chopped off a bit of it so it doesn't appear as centered as it really is.
Posted by Commishbob at 7:55 AM