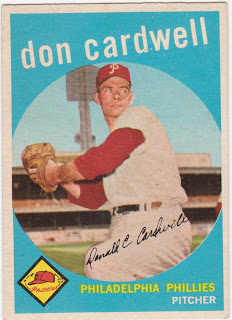 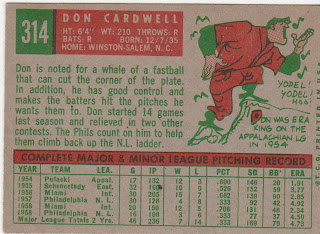 Two events jump out at you when you look at Don Cardwell's career. First, he was the first major league pitcher to throw a no-hitter in his first game after being traded. That happened on May 15, 1960 and Cardwell was making his first start for the Cubs after a trade from Philadelphia.
The second came on September 12, 1969 as Cardwell was helping the Mets in their Miracle pennant race. In the second game of the Mets' doubleheader that day in Pittsburgh Cardwell pitched a 1-0 shutout and drove in the only Mets' run himself. What makes that unique is that in the first game that day Cardwell's teammate Jerry Koosman did the same thing. In that 1-0 shutout Koosman drove in the only run the Mets needed.
So that day the fans in Pittsburgh saw 18 innings of baseball, two runs, both driven in by the opposing pitchers. Wild. And probably a little maddening. More on Cardwell's part of that adventure here.
Cardwell broke in with the Phils in 1957, was traded to the Cubs as noted in 1960. He won 15 games for the Cubs in '61, his career high. In 1963 he began four years with the Pirates after passing through the Cardinals organization briefly in the off season.
In the winter of '66 he was traded to the Mets and was there for their World Series championship in '69. He pitched a 1-2-3 fifth inning in Game One of that Series.
Cardwell ened his career the next season, splitting his games between the Mets and Braves.
I sure like this card, the blue frame looks good with the Phils colors somehow and it's a shot taken in Connie Mack Stadium (at least it looks like it). This copy had decent corners and just a touch of gum residue. I'm looking for a way to get that stuff off this and a few other cards in the set.
Lastly, look at the cartoon. It shows 'Cardwell' yodeling and mentions his being Appalachian League ERA king. Do they yodel in the Appalachian Mountains? I thought that was Switzerland.
Posted by Commishbob at 7:48 AM