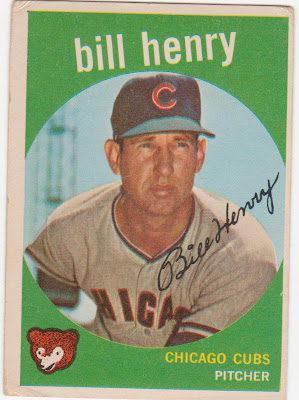 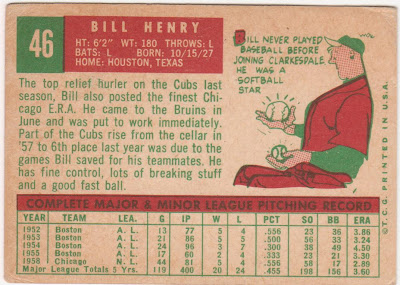 Like me, Bill Henry is a University of Houston alum. Among that elite and talented group only Doug Drabek and Woody Williams had more wins as a major league pitcher. And his 90 career saves in the majors is by far the most by any ex-Cougar. Good for him. And he lives just over the bridge from me here in east Houston's petroleum corridor. LOL

He began with the Red Sox and divided his time between a starting job, the bullpen and trips back down to the minors.

Henry hit his stride in 1959, a year after being acquired by the Cubs and settling full time in the 'pen. He won a career high 9 games that season and was the NL's busiest pitcher with 65 appearances.

That 1959 season began a stretch of five consecutive double digit saves seasons, four of them with the Reds. He had a terrific year in 1964 allowing just 31 hits in 52 innings, striking out 28 against just 12 walks and compiling an 0.87 ERA. Despite that he was dealt to the Giants early in the '65 season and began an odyssey that took him through Pittsburgh and, briefly, Houston before he hung 'em up in 1969.

An amazing story about Bill Henry was chronicled in Sports Illustrated by Rick Reilly a few years back. Seems some other 'Bill Henry' had been passing himself off as 'Bill Henry the baseball player' for years, even to his family. When the guy died the real Bill Henry's wife got condolence calls and the story came to light. Reilly is always a good read. Check it out.

The green frame is been kind of rare so far. Despite a couple of soft corners it shows off the devilishly handsome (all UH grads are devilishly handsome) in his best light. I actually upgraded this card last month at the Houston TriStar show but I'm too lazy to re-scan.
Posted by Commishbob at 8:29 AM