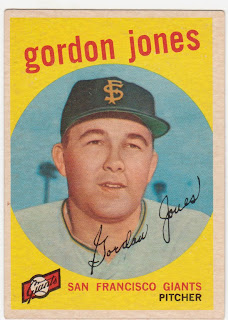 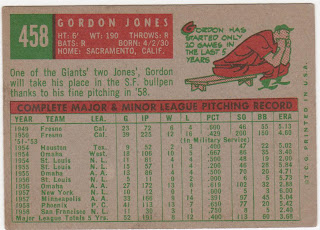 Gordon Jones put in a lot of time in the St. Louis Cardinals' farm system before getting his shot with the big club in 1954. He made 10 starts for the Cardinals that season and went 4-4 with a 2.00 ERA. He never had as good a season after that.
After nine starts with the Cards in '55 he moved to the bullpen almost exclusively for the rest of his career which spanned parts of eleven seasons for the Giants, Orioles, A's and Astros after leaving St. Louis.
His career win totals show a 15-18 mark with 12 saves. His cap shows that crappy faux Giants logo that Topps insisted on painting on Giants players well after the clubs move to the Bay area. It's a SF Seals design and shows the lazy side of Topps design team.
Interestingly this card was used as Gordon's card in the 1991 Crown Oil/Coca Cola Orioles set.  THAT designer simply took the Topps '59 trimmed it back some and recycled it. Ryan at The Great Orioles Autograph Project did a great post on this. Here's the card: 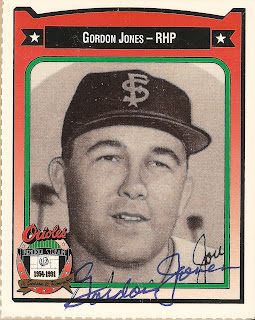 Yikes, is that obviously a cribbed shot or what? And, as Ryan points out, they could have used his 1960 Topps card if they were going to recycle an image. 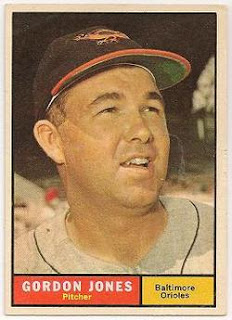 Posted by Commishbob at 5:41 AM