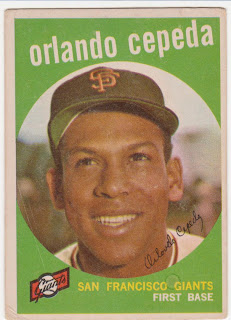 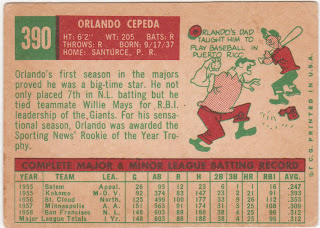 Here's something I didn't know about Orlando Cepeda (but should have): his 'Baby Bull' nickname comes from his father, a local baseball legend in Puerto Rico, being called 'The Bull'.
Orlando Cepeda broke in with a bang in 1958 with the Giants after several big years in their minor league system. Cepeda led the NL in doubles a a rookie to go along with 25 homers and 96 RBI. Grabbed himself the NL Rookie of the Year award and enough MVP votes to finish in the top ten for that award.
Cepeda starred for the Giants, making All Star teams, through the 1964 season. In '65 he was injured much of the times and in '66 was traded to the Cardinals. In 1967 Cepeda won the MVP and helped the Cards win the World Series over the Red Sox.
Cepeda had some productive seasons in Atlanta and Boston and sprinkled in some time with the A's and Royals before he retired. He is said to be the first player ever signed solely as a DH when he joined the Sox in '73.
He was elected to the Hall of Fame by the Veterans' Committee in 1999. After retirement Cepeda has been the Giants' Community Representative and serves in other capacity for the club. He's involved in several charitable pursuits.
Nice portrait card here. The corners of mine are a bit soft and it is off center but Cepeda's smiling face makes it a nice one to own.
Posted by Commishbob at 7:41 AM