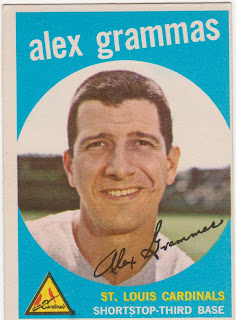 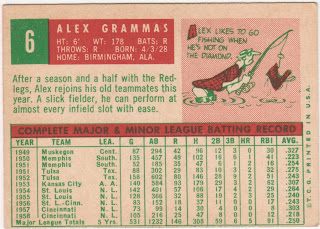 Buzz cut Alex Grammas looks a lot like the Apollo astronauts, doesn't he? After signing with the White Sox in 1949 Grammas kicked around through several teams' systems before emerging for the first of two stints with the St. Louis Cardinals in 1954.
After a couple of years as a regular shortstop there he was moved to the Reds early in 1956 where he played part time for three years. It was back to St Louis for Alex in 1959. The back of this card states that he's been a Redleg for a season and a half but from May of '56 through the end of the '58 season equals almost three seasons.
Back to being an everyday shortstop in St. Louis proved to be a tonic as Grammas had his best year in '59 hitting a career best (as a regular) .269 with three homers. But his numbers and playing time slid again in 1960 and by mid season 1962 he was traded to the Cubs where he finished his playing career that season.
He coached for a couple of organizations for over a decade and then got a shot at managing the Brewers in the AL in 1976/77 where his clubs finished last both years. Following that he spent another decade coaching 3rd base for the Tigers through 1991.
Miscut, decent (though certainly not sharp) corners, nice color and gloss.... this card is not bad.
Posted by Commishbob at 8:01 AM