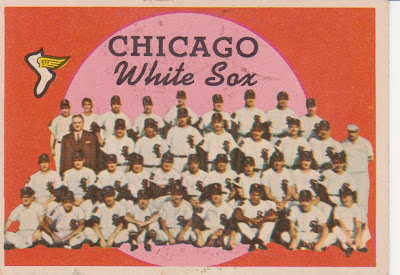 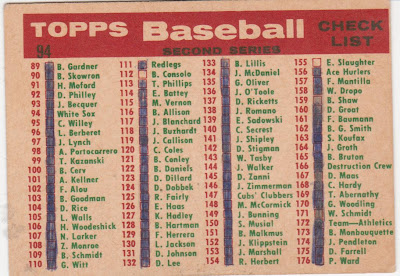 If Topps had known that the 1959 White Sox were going to be American League champs and play in their first World Series since the 1919 Black Sox they might have given them a better looking card than this red and pink monstrosity. Then again, being Topps, they might not have.

The '59 Sox were known as the "Go Go Sox". They relied on manufactured runs and solid pitching to claim the title. They finished first in stolen bases in the A.L., last in homers, third in ERA. They had a Hall of Fame combo up the middle with Nellie Fox and Luis Aparicio and relied on 39 year old Early Wynn for fill the role of staff ace. He did the job quite well with 22 wins.

I hope Sox fans savored their big season because it wouldn't be until 1983 that the franchise would make the postseason.

This card appears to have been owned by the same person who owned the Tigers card featured not so long ago. Same neat ink filled boxes on the backside checklist. It's in nice shape except for some gum stains and the hideous color combo.
Posted by Commishbob at 8:27 AM