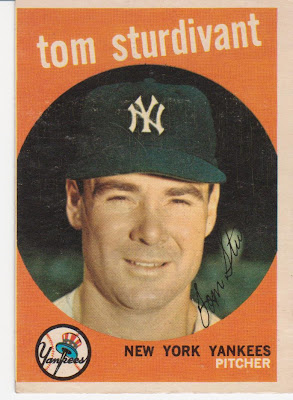 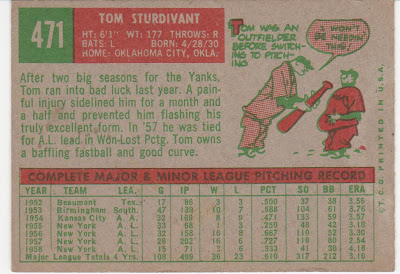 Tom Sturdivant's star shone very bright in two seasons with the New York Yankees. After joining the club in 1955 and appearing in 33 games with mixed results "Snake" Sturdivant exploded onto the Yankee scene in 1956 with a 16-8 record and 5 saves in the duel role of starter and reliever. In Game 5 of that season's World Series against the Dodgers he hurled a six hit complete game win and evened the Series at two games apiece. The notoriety on the win was rather short-lived however as Don Larsen took the mound in Game 5 and proceeded to toss his famous Perfect Game!

Sturdivant backed up his '56 season with an even better 16-6 season in 1957. Exclusively a starter he had 7 complete games in 28 starts and a career best ERA of 2.54. He didn't repeat he World Series exploits in '57 getting a no decision in a Game 4 start against the eventual Series winning Braves. As a bonus Google provided a small but fun piece of his '57 season, a newspaper story and picture of a scrap Sturdivant had with Ray Boone in Detroit.

An arm injury in 1958 ended Sturdivant's days as a front line pitcher. The Yanks traded him to Kansas City in 1959 and from there a series of deals and the expansion draft of 1960 had him on the go to Washington, Detroit, Boston, Pittsburgh, Kansas City (again) and finally back to the city where he gained fame, ending his career with the New York Mets with a short 1954 stint. During those post-Yankee years he never won more than a handful of games in a season.

Tom Studivant died in his native Oklahoma in 2009 and I found an informative obit in his local paper. I also came across an interesting tribute page on a site called Todd's Dugout. Fair warning, don't click on the link to Todd's homepage at the bottom unless you enjoy annoying web renditions of Take Me Out To The Ballgame.

This card is a nice portrait of the guy with the attractive orange frame but my favorite Sturdivant card is his 1957 Topps.

Posted by Commishbob at 7:56 AM