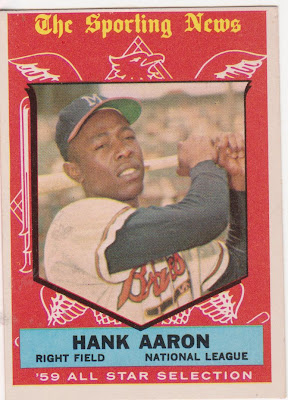 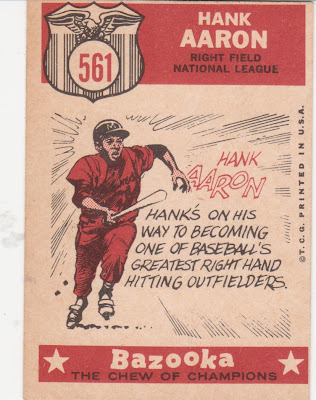 Again an miscut, but this one is still nice. Sharp corners and nice colors. Plus, it's Hammerin' Hank Aaron! What's not to love, right?

But there's a backstory to this one. Over the Christmas holidays I had a flurry of activity going on eBay. Grabbed several small lots of '59's, made a bunch of outright buys, grabbed more on Check Out My Cards and through the Beckett site. At some point I acquired an Aaron All Star for a decent price. Or I thought I did. I had marked it off my checklist but in late January when I went through my stack, putting cards in my binder, it wasn't there. I went back through my email, found the confirmed sale notice, the PayPal receipt and the "Your card has been shipped!" alert. It was obvious to me that I'd somehow lost the card. Looked all over for it and finally declared it 'gone', a casualty of overzealous spending and careless card accounting.

Back to eBay and won another one. Not a bad card and the price was right. Back came the Aaron All Star off the 'wanted' list and I wrote it all off to a lesson learned. But ...(can you see this coming?)... one week ago a padded envelope arrives. One I'm not expecting. Yes, my original #561 Aaron All Star. No explanation of why the card, supposedly shipped exactly three months ago, was just now arriving. I thought about it and decided not to bother asking the seller about it. What would be the point?

So now I have two Aaron All Stars. Could be worse. Could be two Kansas City A's team cards.