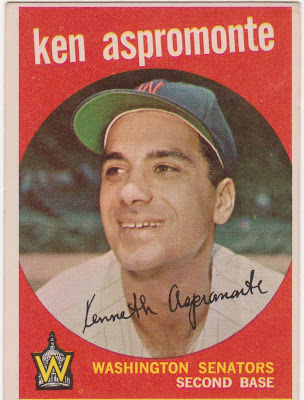 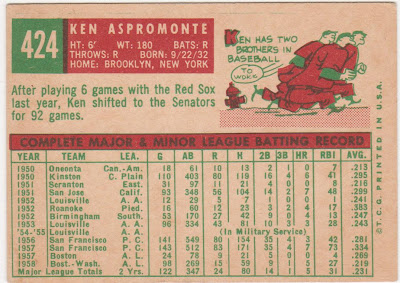 I like the blurb on the back of Ken Aspromonte's card: "After playing 6 games with the Red Sox last year, Ken shifted to the Senators for 92 games." Wow. Thats fairly compelling info, yes?

He's a Brooklyn boy (so am I) who is the older brother of Bob Aspromonte who I'm more familiar with from his days as an Astro and his later career as a beer distributing company executive in the area. The cartoon mentions that three Aspromontes are 'in baseball'. I assume the third is Charles "Sonny" Aspromonte who had a couple of years as a minor leaguer and gets a mention is Jane Leavy's great bio of another Brooklyn native, Sandy Koufax, A Lefty's Legacy.

Ken bounced around for seven seasons, playing for six clubs with only one season as an everyday player. He hit .290 with 10 homers for the Indians in 1960. But the most interesting aspect of his career is his circuitous route through the American League. Here is the trail, as charted by Baseball reference:
So lets see...signed by Red Sox and waits seven years to debut in 1957. Traded from Sox to Nats in early 1958. Traded by Nats to Indians early in 1960. Drafted back by the Nats in the expansion draft late in December 1960. Traded that very day to the Angels. Waived by the Angels the following year and signed by the Indians. A year later traded to the Braves and traded that December to the Cubs who cut him around Opening Day of 1964.

But Ken Aspromonte, player for hire, wasn't done. He went to Japan and played three seasons with two teams over there and returned to the Indians (for a third time) as their manager in 1972. He compiled a 220-260 record, never finishing higher than fourth.