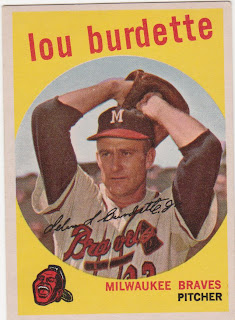 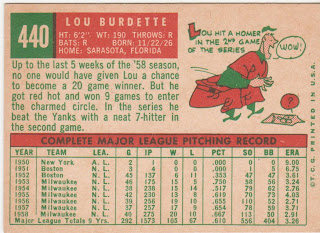 One of the more famous (infamous) uncorrected errors in the '59 set is this one of known trickster Selva Lewis Burdette Jr. Or Lou for short, or is it Lew? Hell if I know, and apparently neither did Topps. They put it both ways on his cards throughout his career, sometimes two different ways on the front and back. He was Lew until 1958 when Topps smoothly transitioned to Lou by having one name on each side. Then he turned into Lou.

﻿Even Bowman used Lou in the early 50's so kids were probably more confused than I am if they even bothered to pay attention. To be fair, a Google search of "Burdette" turns up links using both 'Lou' and 'Lew'.

But Burdette got revenge (or is it the other way around) by posing for the shot on this 1959 classic as a lefty. Reportedly that was friend and mound mate Warren Spahn's glove used in the shot. I think you can see Burdette trying not to smile too widely in this one.

No matter. However you spell his name on a card, Lew Burdette was a terrific pitcher for the Braves. He won three games in the 1957 World Series over the Yankees. Two of them were shutouts. He finished with 203 wins after a late career tour of St. Louis, Chicago (Cubs) and L.A. (Angels). Along the way he had seasons in which he led the NL in wins, E.R.A, shutouts. win-loss %, assists, starts among others.

The colors on my copy are sort of muddy but the corners are sharp. For many reasons this is one of my favorite cards in the set.
Posted by Commishbob at 4:45 PM