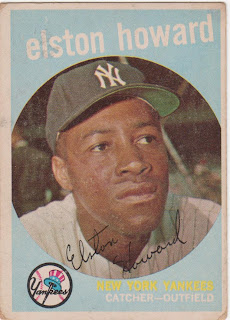 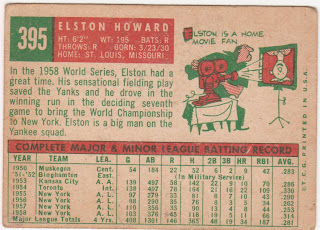 I think it's time for a disclaimer. I've always been an Orioles fan, from the time I was old enough to understand baseball. But I grew up watching the Yankees. I had no choice as my father was a Yankee fan. Together we watched Yankee games on the tube and as I've noted before, went to many, many games at the stadium. So if it seems I have an unusual affinity for some Yankee players it's simply that I saw so much of them growing up

This is a very rough version of Yankee star Ellie Howard's '59 card. That's too bad because it's a nice one. Ellie's pensive look, Yankee Stadium background, cap and pinstripes and especially the light blue frame with the top hat logo. It all just seems to work. This is a card I'll upgrade some day. And check the cartoon... "Elston is a home movie fan." LOL

And who wrote that back-of-the-card blurb? "In the 1958 World Series, Elston had a great time." As in lots of parties? I know they meant that he had a fine Series on the field but it's pretty dumb as written. And "Elston is a big man on the Yankee squad." Well, if you say so.

Actually Elston Howard was a pretty damn good player. Nine straight All Star selections, a couple of Gold Gloves and he was the 1963 American League MVP. Best of all is the fact that he was a nice guy. He had opened Elston Howard Travel in my hometown of Nutley, New Jersey. When it opened my best friend and I would walk by daily hoping for a glimpse of a major leaguer. One day a woman waved us in to the offices and told us to come by that weekend. Sure enough Elston was there and he signed pictures for us. Probably my first in person autograph and definitely our first off the field encounter with an athlete. Cool memory.
Posted by Commishbob at 7:42 AM