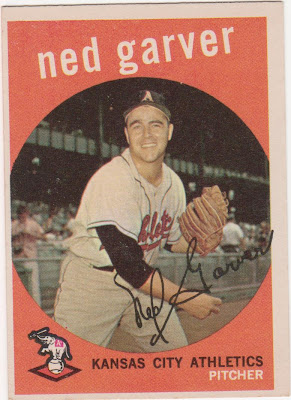 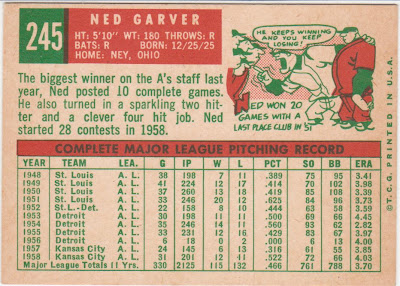 Here's a guaranteed 'bar bet' winner for you.... Who's the only pitcher to win twenty games for a 100 loss team and do it with a winning record?

Why it's Ned Garver. Garver toiled from 1948 into 1952 for the generally hapless St. Louis Browns. In 1951 Ned finished with a 20-12 record while on a club that lost 102 games. In fact he collected 20 of the Browns 52 wins. Thats nearly 40%. Hell no other pitcher on that Browns club had more than six wins! He completed 24 of his 30 starts. Pretty damned amazing. And it showcases one of the really cool things about doing a blog that almost nobody reads... I learn some great stuff about players I knew very little about in many cases.

And Garver's 1951 season wasn't just sterling from a pitching standpoint... he hit .305, frequently batting sixth and started the All Star Game in Detroit. No wonder he finished second in the MVP balloting that year.

Unfortunately Ned Garver never had another season that approached his '51 campaign, before or afterwards. He had some decent years with the Tigers and A's through the fifties, with double digit win totals in five seasons. He finished up with the '61 Angels.

Posted by Commishbob at 8:07 AM