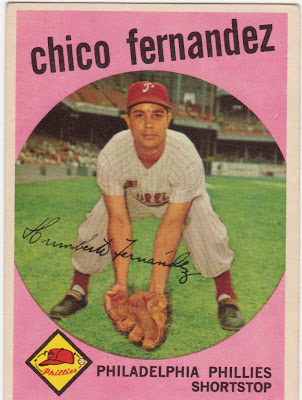 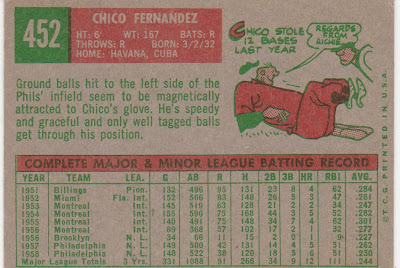 Guys don't go by 'Chico' very often these days. This 'Chico', Cuban born Humberto 'Chico' Fernandez,  was a hot shortstop prospect when he signed with the Dodgers in 1951. Only one thing kept Fernandez from grabbing a roster spot in Flatbush... Pee Wee Reese. Brooklyn brought Fernandez up in July of 1956 and gave him a audition, moving Reese over to third to hold down Jackie Robinson's slot for a few weeks. Fernandez batted .227 in his time on the big club and was dealt to the Phillies for the 1957 season.

He held down the starting job there for a couple of seasons before losing it (possibly to a mid-year injury) in 1959. Traded to Detroit before the 1960 season he took over the shortstop job there for three seasons. In 1962 he hit 20 homers. This from a guy who hit a total of 40 in his entire career. I wonder if they checked his bat?

In May of '63 he was traded to the Braves and on to the Mets in one day. He finished out that year in New York and then bounced around through the systems of several organizations and the Mexican League. He quit for good in 1968.

Off-center, pink frame, foul ground fielding pose. Nothing really special here, except the ballpark! It's Connie Mack Stadium for sure. Nice to see something besides Yankee Stadium on a card.