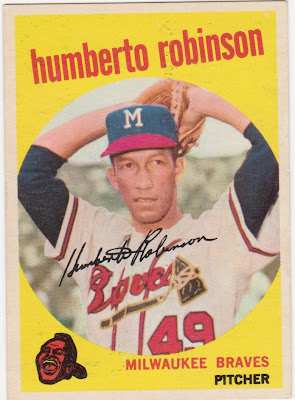 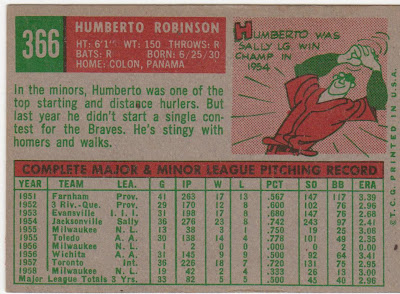 Humberto Robinson was the first of many Panamanians to play in the major leagues. He debuted on April 20, 1955 with a one batter save in Wrigley Field against the Cubs. He entered the game in relief of Lew Burdette with the bases loaded and the Braves on top, 9-5. He K'd Cub cleanup hitter Hank Sauer to preserve Burdette's second win of the young season. Welcome to the majors, Humberto Robinson.

Robinson remained with the Braves through the 1958 season pitching mostly in relief. He spent the '57 campaign in the minors (winning 23 games with Toronto) and last pitched in '58 during mid-September so it's unclear if he was on the Braves World Series roster that season.

By the time this card was issued he had already passed from the Braves organization via an April trade to the Indians and a month later was moved along to the Phillies. By the end of 1960 he has back in the minors and never resurfaced on a major league club.

But before he died in Brooklyn in September of 2009 he was able to tell folks that he wore (arguably) the finest uniform in baseball if not all of sports, the Braves gorgeous togs seen in this card.
Posted by Commishbob at 8:12 AM