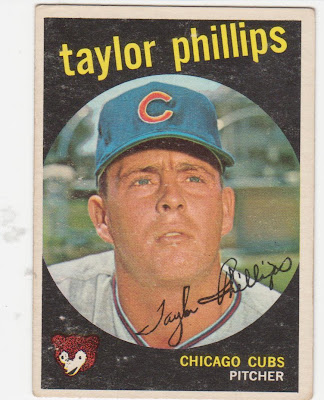 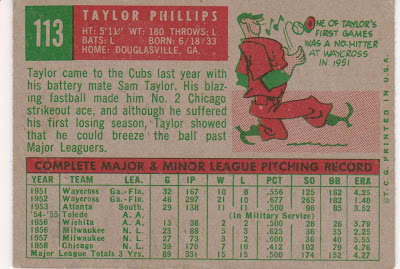 There is something about the '59 set's black framed cards that 1) I really like and 2) makes them scan like crap. The card of Cub pitcher Taylor Phillips looks much better in person. Those surface scuffs just get magnified through my scanner.

But anyway.... Phillips pitched for the Braves, Cubs and Phils from 1957 through 1960 and, after banging around in the minors for a spell, resurfaced in Chicago with the White Sox in 1963. That was a brief stay and he spent another year in the minors before hanging up his spikes in 1964.

"T-Bone" (yup, that was his nickname) was a regular in the Cubs rotation in 1958. He made 27 starts (2nd most on the club) and went 7-10. He never had or would approach those totals in another season. The Cubs gave him two starts the following year (1959) before shipping him to Philly in May.

The card's cartoon makes note of Phillips' no-hitter in his first pro season in Waycross, Georgia. Any reference to Waycross brings to mind Pat Jordan's great book, A False Spring. It's his autobiographical account of a promising baseball career gone sour. A Braves' prospect during their glory seasons in Milwaukee, Jordan, who went on to write for SI among many other journals, recalls (among much, much more) his time in spring training in the Georgia town. If you are reading this you must have some interest in the game of baseball in the late 50s/early 60s. You owe it to yourself to check out Jordan's work.
Posted by Commishbob at 8:30 AM