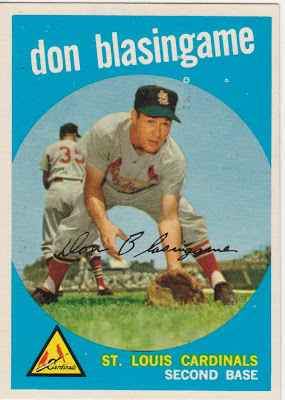 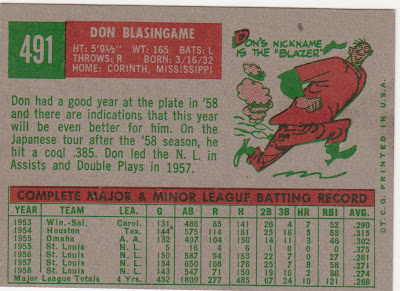 Just a damn classic baseball card. Don Blasingame on a spring training field probably taken in 1958. You can tell because that's Stan Hack in the background. Hack was the Cards' hitting coach (and short term manager) that year.

"The Blazer" broke in with the Cardinals in the mid-fifties and went on to have a solid if unspectacular career in the bigs until he retired in 1966 after a stint in the American League.

Known more for his defensive skills and bunting ability he also managed to put together a handful of good seasons at the plate, hitting in the .280s a couple of times. His best season was arguably 1957 when he hit .271 but totaled career highs in homers (8), RBIs (58) and stolen bases (21). He made the NL All Star team the following season.

Blasingame played on the Reds NL Championship team in the 1961 World Series collecting a hit and a run scored in 7 at bats.

He was the son-in-law of Walker Cooper who played from 1940 through 1957 for pretty much every National League team at one time or another.
Posted by Commishbob at 8:40 AM