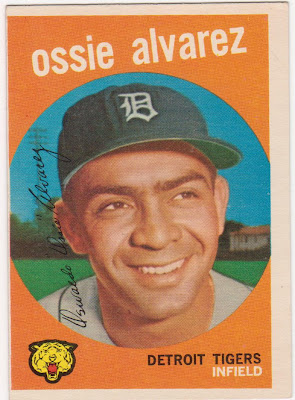 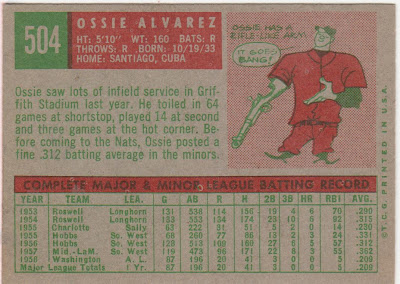 ﻿
Second smiley, happy-go-lucky face in a row. Cuban born Ossie Alvarez began his pro career with the independent Big Spring Broncs of something called the 'Longhorn League' in 1952. It's sort of mind blowing to imagine being an 18 year old Cuban immigrant making your way on a gypsy baseball team in Big Spring, Texas in 1952. Baseball Reference has the roster of the '52 Broncs and it looks like at least Ossie wasn't alone in his plight.

After a few years in the Longhorn League he joined the Senators organization. He spent the 1958 season in the majors with Washington getting almost 200 at bats. He was traded twice in the off season and began the '59 campaign with the Tigers and played in eight games early in April, mostly as a pinch runner.

Following that cup'o'coffee Ossie went back to the minors and kicked around through the systems of several teams before playing in Mexico City with the MC Reds and retiring there in 1966.

Peering out of that orange frame on my nice but off center '59 Topps, Ossie Alvarez looks like a friendly, fun loving sort of guy. I hope he enjoyed his time in Big Spring.
Posted by Commishbob at 7:47 AM