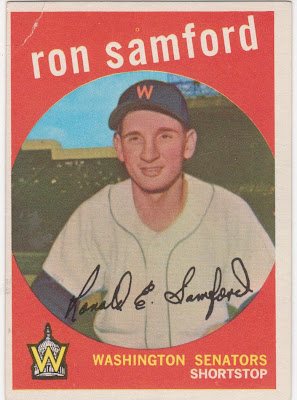 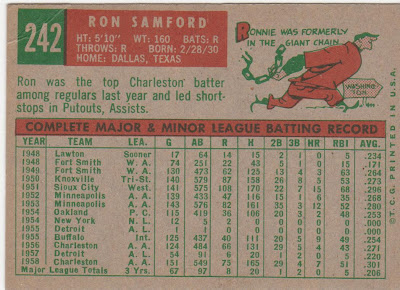 Ron Samford is one of the more obscure players in the set. He originally signed with the New York Giants getting into a dozen games with the in 1954, mostly as a defensive replacement and pinch runner. He eventually was picked up on waivers by the Tigers and had a hundred at bats with them.

He's pictured here in an airbrushed Tiger home uni, the right field stands of Tiger Stadium looming over his shoulders. Those light standards are easily recognizable, those are the ones Reggie Jackson reached with a homer in the 1971 All Star Game.

Samford played with Washington in 1959 having been obtained in a trade and had his last (and most productive) season there playing as a platoon infielder and knocking out 5 homers. Samford ended his career with a handful of minor league seasons including a couple in the Orioles' chain. I didn't know that.

Kind of a shame that this copy of his card is scarred with a big fat folded over corner crease. Otherwise it's pretty sharp.
Posted by Commishbob at 8:11 AM