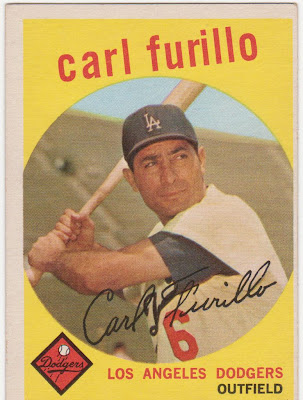 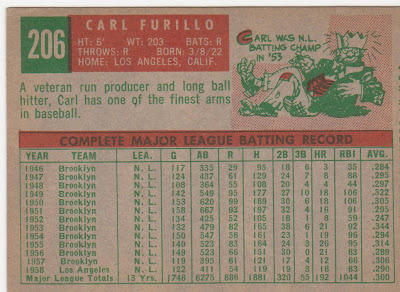 It's not quite Ted Kluszewski as a Pirate or Roger Maris on the A's but Carl Furillo is one of the 'Boys of Summer' and just doesn't look right on an "L.A." Dodger ﻿card. He needs the distinctive Brooklyn Dodger "B" on that cap. And the view of the vast L.A. Coliseum bleachers just doesn't say "Carl Furillo" to me. Where's the 'GEM Razor' sign? So to me the severe 'off-centeredness' of this card isn't the only thing 'wrong' with it.

Furillo (aka "Skoonj") was known for his powerful arm, ability to play the quirky rightfield corner in Ebbetts Field and his consistent work with the bat. He won the 1953 batting title in the NL with an average of .344 and hit at least .290 in nearly every season he was a regular. Furillo finished with a career .299 average and nearly 200 homers as well. Like a lot of players of his generation Furillo lost several potential major league seasons serving in World War II.

He saved a lot of his best work for the seven World Series' in which he participated. His spectacular catch of a blast off the bat of Johnny Mize (who already had hit three homers in the Series) saved the Game 5 6-5 Dodger victory in the 1952 Series against the Yankees. He hit a pinch single drove in two runs in the Los Angeles Dodgers' 3-1 win over the White Sox in Game 3 of the '59 Series.

Furillo's career ended the following season when he was released by L.A. while injured and Furillo later sued over his release, winning a reported $21,000. Though the allegation was denied by baseball Furillo always maintained he was blackballed by the sport due to that lawsuit.

Carl Furillo went on to own a Queens, N.Y. deli and worked for Otis Elevator. He worked as a foreman on the installation of the elevators in the World Trade Center.

Posted by Commishbob at 8:16 AM