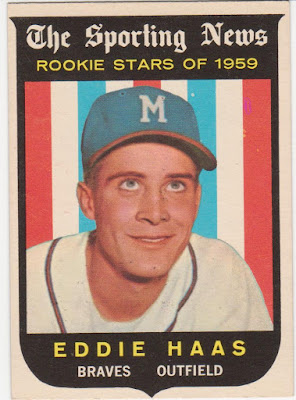 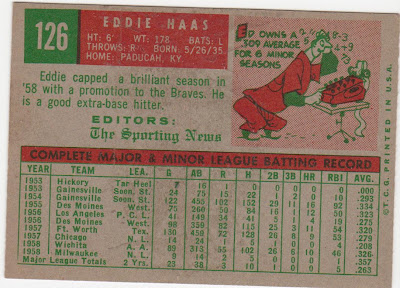 Surely Eddie Haas isn't ruling his eyes and looking bemused because my scanning skills (and laziness) have given him a card front and card back that slant in different directions. Ya think? Maybe he's just expressing  his disbelief that he was chosen by The Sporting News as a 'Rookie Star of 1959'.

Haas actually showed some promise in the minors as he climbed through the Cubs system after signing in '53. He made it to the majors in 1957 and played in a handful of games. Traded to the Braves before the 1958 season he made a few appearances that season as well. Because of a broken leg it wasn't until 1960 that he returned to the Braves and got his last experience with the big club. He hit his one major league homer in July of 1960, against the Cubs naturally.

Haas went on to coach in the Braves organization, working his way up to manager of the Atlanta Braves in 1985. He was fired in August of that year with his club in 5th place.

He then scouted for both the Expos and Red Sox. Eddie has a brother, two sons and a couple of cousins that worked/played in pro baseball.
Posted by Commishbob at 6:39 AM