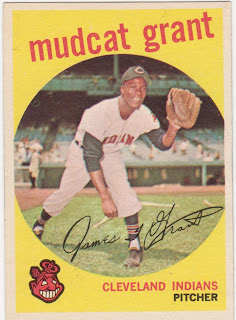 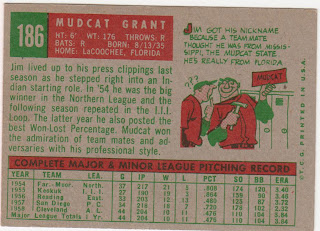 There are several stories as to how Jim Grant became 'Mudcat" Grant, there's even one on the back of his '59 Topps. But I prefer the the one that attributes it to teammate Larry Doby who described Grant as "ugly as a Mississippi mudcat".

Grant signed with Cleveland, making his pro debut in 1954. He hit the big time in 1958 which is likely when this '59 card picture was taken. He went 67-63 pitching for some lousy Indians teams before being dealt to the Twins in June of 1964 for Lee Stange, George Banks and $$$. According to his Baseball Reference bio page the Indians seemed embarrassed by the deal (they needed the money) and nobody there had the guts to tell him about it. He had to ask why his gear was no longer in his locker.

The trade to the Twins was a turning point, Grant went on to a nice finish in '64 but his 1965 season turned out to be a career maker. He was 21-7 and won two more in the World Series against the Dodgers (along with hitting a homer). He was the first black [American League*] pitcher to win a World Series game. His numbers were impressive but he chose to put them up in a year Sandy Koufax dominated and Grant didn't get a sniff of the Cy Young (Those were the days of one award).

Grant went on to pitch for the Twins through 1967 and then for 5 other clubs with modest success until retiring in 1971.

Since the Mudcat Grant has experienced a whole lifetime of baseball roles. He served as an executive and broadcaster for the Indians, broadcaster for the A's, and has written a book entitled The Black Aces chronicling the careers of some of baseballs' best hurlers. Mudcat also has another website (which is likely unofficial) and Twitter account (although the later doesn't appear very active to say the least).

As I've said previously I'm constantly amazed at the things I learn with the bits of research I do to make these postings. Mudcat Grant is right up there with Don Hoak as multi-faceted men worth reading more about. Frank Deford had an entertaining story originally published in Sports Illustrated in 1968 thats reprinted on Mudcat's official (Black Aces) site. Well worth the read.

*=Thanks to a reader for alerting me to my omission on this.

Posted by Commishbob at 8:53 AM