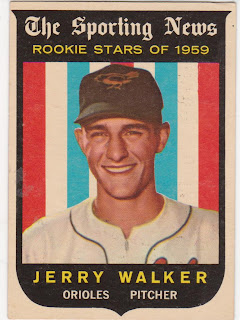 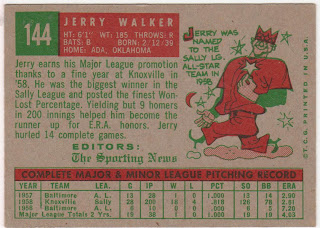 Jerry Walker had a brief but meteoric major league career that began almost immediately after signing with the Orioles as a 18 year old 'bonus baby' out of Ada, Oklahoma.

After pitching in 13 games for the O's in '57 Walker spent most of 1958 in the minors but in 1959 he opened the season in a rush and found himself on the mound starting (and winning) the first 1959 All Star Game for the American League. He finished the season at 11-10 which proved to be his best season.

Walker was the youngest Opening Day starter in franchise history at the age of 21 years, 67 days. He gained notoriety as a member of the so-called Kiddie Corps, the Orioles' young front liners along with Steve Barber, 22, Chuck Estrada, 22, Jack Fisher, 21, and Milt Pappas, 21.

Post playing career found Walker serving as a minor league manager in the Yankees' chain, scout major league pitching coach and front office executive including a stint as the Tigers' GM. He currently is a VP and special assistant to Red's GM Walt Jocketty.

The colors on my copy of this card are just a touch faded but the corners are strong and it's truly one of my favorites. Jerry Walker's youthful, happy face smiling from the colorful background and the Orioles uni make it special. I'm not the biggest fan of these Rookie Star cards but if I could keep only one, this would be it.
Posted by Commishbob at 7:48 AM