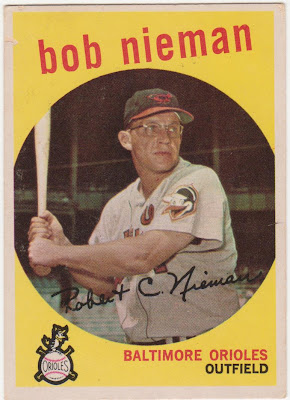 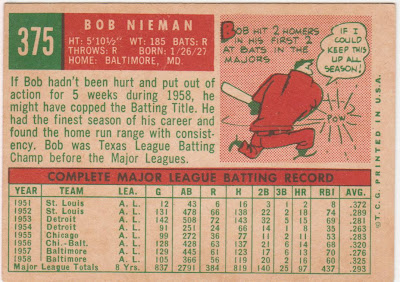 Bob Nieman was among the Orioles first 'stars'. He debuted with the Browns in 1951 and wound his way through several organizations in the A.L. Nieman's claim to fame is the fact that he hit homers in his first two major league at bats as a Brown on September 14, 1951 in Fenway Park. He arrived in Charm City in May of 1956 via a trade with the White Sox.

Bob apparently got off the plane hitting and kept it up all season for the O's finishing with a .320 average. He finished 7th in the MVP voting that year. Not too shabby considering he was behind people like Mantle, Berra, Kaline and Williams in contention for that award.

Bob assembled a nice six year stint with the Birds hitting over .300 with 82 homers playing half his games in what was then a cavernous Memorial Stadium. He was dealt to the Cardinals for the 1960 season, spent that year as a part time starter and wound down his career with brief stays in Cleveland and San Francisco.

Following his playing career Nieman served as a scout for several clubs including the Indians for whom he discovered and signed John Lowenstein. Considering the love that O's fans have for 'Brother Lo' it's kind of a toss-up which aspect of Bob Nieman's baseball career made a bigger impact on the O's!

I wish the Orioles would bring back that Oriole head patch that appears on Bob's uniform. Not as a permanent thing, but it would be nice to see it from time to time. Especially for us oldtimers.
Posted by Commishbob at 8:23 AM