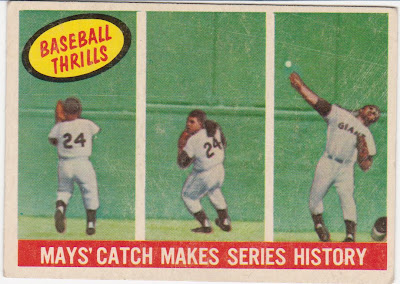 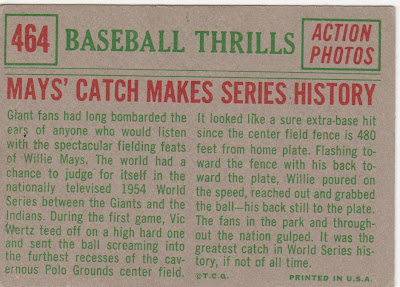 This may not be the best catch in baseball history, even Willie Mays said he made better ones himself, but it's surely the most famous. As the back of the card states Willie made this nab on a ball hit by Vic Wertz in Game One of the 1954 World Series between the Giants and Indians. He snared it with his back to the plate, wheeled and threw to the infield forcing Al Rosen to return to first. The Giants won the game in 10 innings and swept the Series.

What has added to the fame of the catch is the fact that it was televised in a era when TV was still a bit away from being the universal presence that it is nowadays. Watching the Series on the tube was an opportunity that was hard to pass up. Thus Willie's effort was seen by many.


The best catch I've ever seen live was made by Roberto Clemente at Shea Stadium on September 20, 1969. With two out in the sixth inning Bob Moose seemed about to lose a no hit bid on a drive to the deep right field corner by Wayne Garrett. But Clemente ran/flew/dove and somehow speared the ball before if hit the warning track. It was the most athletic play I've ever seen. And yes, Bob Moose went on to finish his no hitter, the only one I've ever witnessed in person.
Posted by Commishbob at 10:40 AM