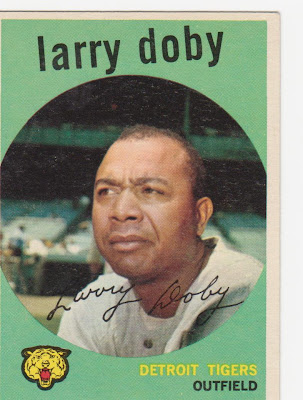 I was planning to post Larry Doby's card last week on MLB's Jackie Robinson day ﻿but it got away from me. Doby is credited with being the second black player to appear in the modern major leagues and the first in the American League.

Doby was born in South Carolina but grew up in my neck of the woods, Paterson, New Jersey.

Doby was signed by Indians owner Bill Veeck in 1947 less than three months after Jackie Robinson debuted with the Dodgers. He had been playing since 1942 in the Negro Leagues for the Newark Eagles with a break to serve in World War Two. He teamed with Monte Irvin to win the Negro League Championship as an Eagle.

In 1948 he won a World Series ring with the Indians and in the process became the first black player to hit a homer in a Series game. Doby was traded to the White Sox prior to the '56 season having appeared with the Indians again in a World Series, the losing effort of 1954 against the Giants. That Cleveland team however, won an impressive 111 games. As an Indian he had won two A.L. home run crowns as well.

After two seasons as a Chicago regular Doby wound down his career with return visits to Cleveland and Chicago sandwiched around a stint with Detroit which lasted 18 games. Long enough to be pictured here as a Tiger on his '59 card.

Looking at the seafoam green framed card I own I'm beginning to think "one off-center card at a time" would make a better tagline.
Posted by Commishbob at 8:53 AM