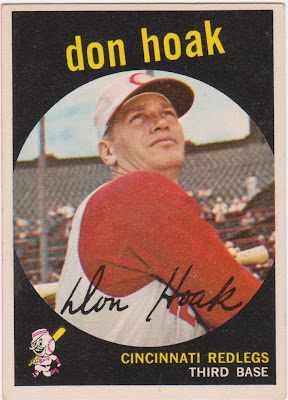 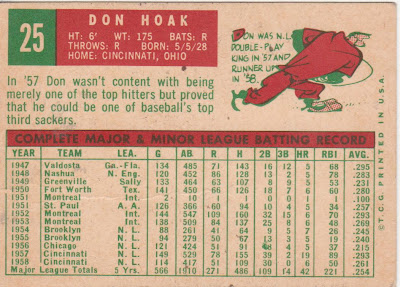 You uncover a lot when researching players in this set. I found out that Don Hoak was married to Jill Corey, a pop/nightclub singer of some renown in the late 1950s. Ms. Corey has devoted a large part of her website to her late husband.

Don Hoak played for eleven seasons in the NL, retiring in 1964. He was known as a tough, hard-nosed player who brought a boxers mentality (he was a youth boxer) to the ball field. He also gained some notoriety for once facing a pitcher named Fidel Castro on a sandlot field in Havana.

Hoak grabbed a couple of World Series rings along the way, first with the 1955 Dodgers and then with the 1960 Pirates. He finished as runner-up in the MVP balloting for 1960.

I've mentioned several times how much I like these black framed Reds (aka Redlegs) cards. They are 1950s baseball on a square of cardboard.
Posted by Commishbob at 7:55 AM