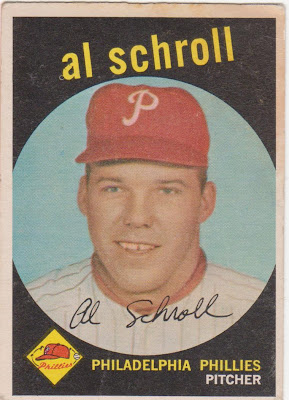 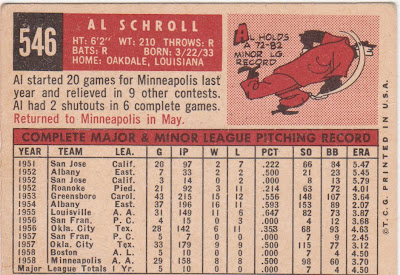 Who is Al Schroll? And how can a major leaguer look so much like the kids I played Pony League ball with? What did Topps do... use his junior high team picture? According to Baseball Reference his nickname is "Bull"!! Are they serious?

Anyway, Al Schroll played in parts for four seasons with four different clubs compiling a 6-9 record and a 5.34 ERA. He pitched for 13 years in the minors.

Here is an interesting piece of trivia. Schroll and Jack Kralick both homered for the Twins on August 20, 1961.  It was the sixth time in history that a pair of pitchers have homered for the same team in the same game. It was Schroll's only homer but he had a .273 career batting average. Not too shabby.