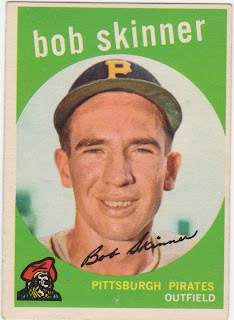 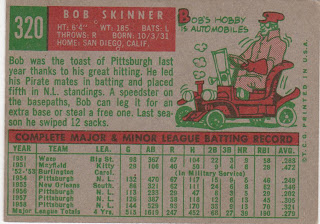 Bob Skinner was a two time National League All Star and twice received votes in the MVP balloting. Not a lot of votes, but votes nonetheless.

A career National Leaguer, Skinner began playing with Pittsburgh in 1954. He started full time that year but went back to the minors for '55. Back up for good in 1956 Skinner was a platoon player that season but was a regular in the Buccos' outfield from 1957 until being traded to the Reds in '63. Along the way he contributed  a handful of .300 seasons and helped the Pirates win the 1960 Series.

He went on to the Cardinals in a 1964 deal, just in time to snag his second World Series ring. After retiring in 1966 he went on to a managing career in the minors and in the big leagues with the Phils and, as a one game interim, the Padres. He's the father of Joel Skinner, former big league catcher and, like the old man, a manager. They are one of just two father/son combos to manage.

Skinner (the elder) remained in the game as a coach and currently works in the scouting department of the Astros.

We see him here wearing one of the odd flocked batting helmets that Branch Rickey foisted on his club in the 50's. We've seen a Pirate pitcher or two wearing them and more are coming.
Posted by Commishbob at 7:10 AM