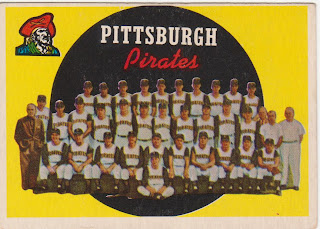 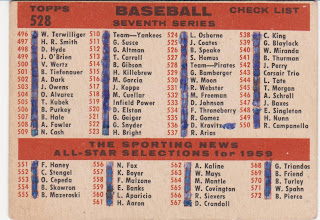 The 1959 Pirates were a slight dip in the franchise's road to top of the baseball world. Coming off a second place, 84-70 season in '58 (the teams' first winning season in a decade) this year's club slipped to fourth just a couple of games over .500.

In 1960 the Pirates hit the big time, winning the NL pennant and defeating the Yankees in seven games in a Series rich in baseball lore.

In '59 the Buccos were led by an up and coming star in 24 year old Roberto Clemente, strength on the corners with Dick Stuart and Don Hoak, and glove wizard Bill Mazeroski at 2nd. They featured pitcher Vern Law who won 18 games in a preview of his 1960 Cy Young Award winning performance and Elroy Face whose 18 relief wins remains the baseball record.

Looks like whoever owned this card originally was able to complete the 7th series. And they marked it a lot more neatly than most filled in checklists I've come across. An added bonus is the fact that the card frame represents (more or less) the Pirates colors. No way to know it that was planned or just coincidental.
Posted by Commishbob at 8:12 AM