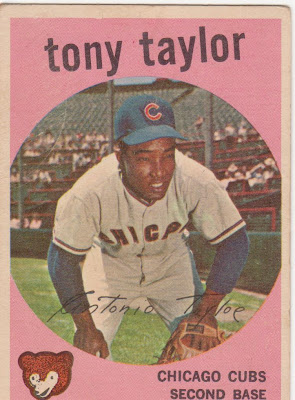 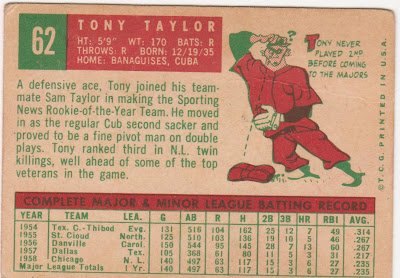 Though shown here early in his career when he toiled for the Cubs, Tony Taylor spent his salad days as the 2nd baseman for the Phillies. ﻿He had a solid career both at the plate and in the field. His .261 career average is a point higher than his contemporary Bill Mazeroski's .260 (and Maz made the Hall of Fame). Taylor, one of many Cuban players who were around the majors in the late '50s, signed originally with the Giants but debuted with the Cubs before his long stretch through the 1960's as a Phils regular and a stint in the early '70's with the Tigers. Taylor finished up his career with the Phillies as a bench player for 3 seasons.

While not in any way a H-O-F caliber player Taylor was a solid major leaguer and was twice honored for his accomplishments. He's a member of the Philadelphia Baseball Wall of Fame as well as the Hispanic Heritage Baseball Museum Hall of Fame.

I'm not sure what it is about the pink frames that I like so much. Somehow, against all odds, they work well on the 59s. Once again my terrible scanning skills rear up and make the card appear different than it truly is. I cut off the bottom of the card front scan. Those corners are no way nearly that sharp.
Posted by Commishbob at 8:39 AM