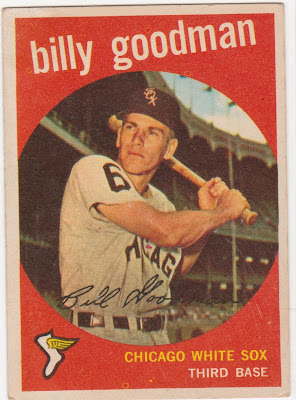 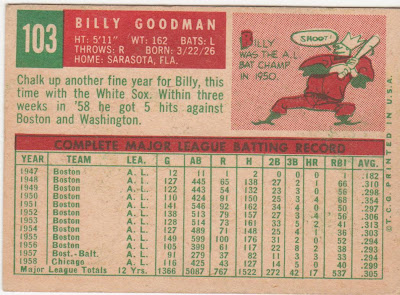 Billy Goodman may be the best player in history that I knew absolutely nothing about. I mean he had a .300 career batting average. He finished second to Phil Rizzuto in the 1950 MVP voting. He led the league with a .354(!) average that season. .354? WTH? Who is this guy? He hit .300 or better five times and .290 or better nine years in a row including eight seasons beginning with 1948 with the Red Sox through his first season with the White Sox, 1958. Goodman spent some time with the Orioles in 1957 and finished his career with the expansion Houston Colt 45s in 1962.

And he's posing by the 3rd base dugout in Yankee Stadium. Red frame card, cool Sox logo, classic Sox uni. Whats not to like about this card? Except maybe the crappy crooked scan that I'm too lazy to redo. Had I known Billy Goodman was such a stud I've have taken more care to get it straight.