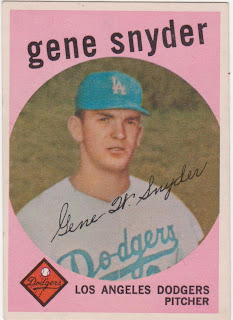 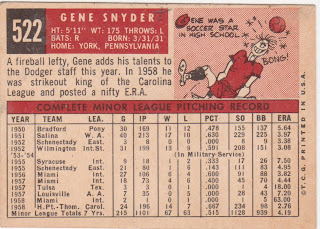 This '59 card was issued the same year Gene Snyder had his only major league stint. He got into 11 games with the Dodgers during the first half of that year. He had spent seven seasons in the Phillies organization before coming to the Dodgers in a deal that sent Sparky Anderson to the Phils.
Taking a good look at Gene's minor league numbers will give you some idea of his mound abilities. His strike out and walk totals are just out of sight! Topps calls him a 'fireball lefty'. I'll bet. He never made it back to the majors after being sent down in July of '59.
Apparently he was one of the best schoolboy players that the York, Pa. area has ever scene. The article I linked to had this to say:

Gene Snyder ('49, North York): He was a star left-handed pitcher who signed with the Philadelphia Phillies as an amateur free agent. Though he signed with the Phillies, he saw his only major-league action as a member of the Los Angeles Dodgers in 1959. He pitched in 11 games and went 1-1 with a 5.47 ERA that year for the Dodgers. Armed with a stunning curveball, he was famous for striking out 31 batters in a 14-inning American Legion state playoff victory. He also was a standout basketball player. When Snyder died in 1996, York County baseball long-timer Marlyn 'Curly' Holtzapple said: "Gene was a super guy. (I) remember him as a terrific competitor who probably had one of the best curveballs ever by a lefty. If his control wasn't a problem, he might have had a long, long career in the big leagues."

I like the last line... lol. But 31 K's in 14 innings is impressive at any level. And one last thing. Look at Gene's ERA with Miami in 1958....63.00. I don't think I've ever seen one that high on the back of a card. This is a high number in pretty nice shape. I don't know if Topps painted these cards or what. I'm guessing they 'retouched' the whole photo.

Posted by Commishbob at 7:31 AM