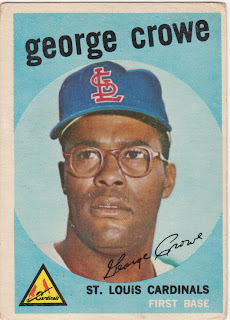 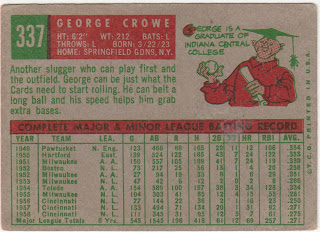 George Crowe looks pretty studious with those glasses. In fact, as noted on his cartoon, Crowe graduated from what was then Indiana Central College, now known as the University of Indianapolis.

George played in parts of nine seasons for three different National League clubs. His only year as a full time player was 1957 with the Reds. Interestingly he played for three teams that made World Series appearances within a few seasons after he left them. No word on whether or not he developed facial tics from all that.

National League baseball was but one facet of Crowe's life. Wikipedia informs us that he played in the Negro Leagues for the New York Black Yankees and basketball for the barnstorming New York Rens and Los Angeles Red Devils alongside Jackie Robinson.

My copy of George Crowe's card is middle of the road for my set. Soft corners and off center (I think I'll just make a macro out of that, save some keystrokes). His Cardinal cap is airbrushed but the guy who did it had some talent.

George Crowe passed away on January 18th of this year. Having shared outfield space with Stan Musial, Hank Aaron and Frank Robinson and dishing to Jackie Robinson on the 'give and go', I bet George could keep his grandkids entranced with cool stories.
Posted by Commishbob at 8:28 AM