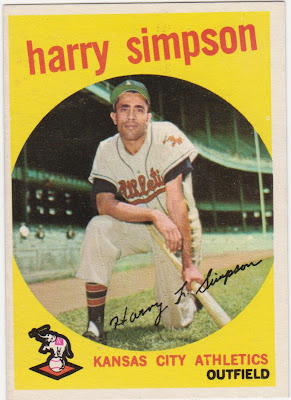 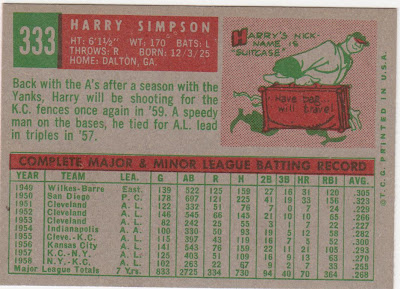 As long as we are busting myths (see the Stu Miller 'blown off the mound' entry) lets settle the case of Harry "Suitcase" Simpson. Logic would tell you that a guy that was dealt as many times as Simpson was during his career could easily acquire the nickname "Suitcase". It's even inferred by the cartoon on the back of this 1959 card. But according to Wikipedia (and who could doubt Wikipedia?) he was referred to as "Suitcase" Simpson in the 1951 Cleveland Indians Sketch Book. That publication, a yearbook-type annual, notes that Simpson was named 'Suitcase" by sportswriters as a reference to a Toonerville Trolly comic character.

Harry poses in Yankee Stadium in the classic kneeling with a bat pose. My copy is pretty sweet. Nice corners and no scars.
Posted by Commishbob at 8:09 AM