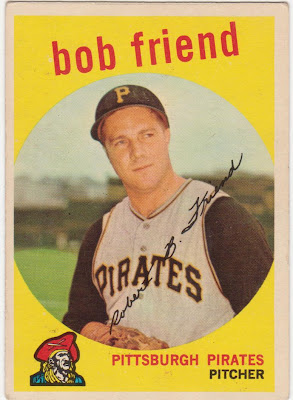 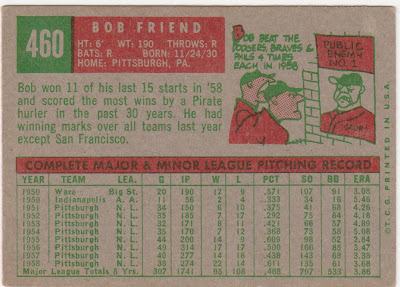 Bob Friend spent 15 of his 16 seasons with the Pirates, went to three All Star games, and retired in 1966 with a 197-230 record. When this card was issued in 1959 he was coming off his one twenty win season. He was the first pitcher to lead his league in ERA for a last place club.

After his playing days Friend went into politics in the Pittsburgh area serving two terms as the Allegheny County comptroller. He also was a delegate to the Republican party conventions in those years and became friends with Richard Nixon. An avid golfer he passed along the love of the game to his son Bob Friend Jr. who was a competitor on the PGA's Nationwide tour.

After his playing days Bob sold insurance until he retired in 2002.

This card shows Bob wearing a Pirates batting helmet as will many other cards of Pirates in the 50's sets. Branch Rickey was a firm believer in helmets and made them mandatory for his Pirates teams beginning in 1952. He encouraged their use in the field as well so even pitchers were wearing them on the mound.
Posted by Commishbob at 10:58 AM