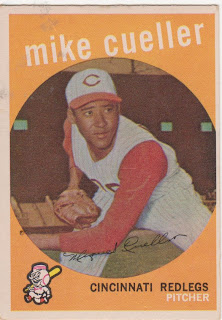 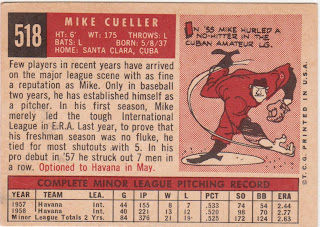 We came to Houston in the late '60s because my father was transferred here by Shell Oil. One of the perks was scoring company seats at the Astrodome from time to time. And I'm here to tell you that Shell had goooood seats. Second row behind home plate. So nice in fact that they shared that row with the Astro management and sometimes we were sitting next to team executives ﻿and other front office types.

But we attended one game in 1968 that had us seated next to then-Astro Mike Cuellar and  reliever Fred Gladding. Fred Flintstone was on the DL so I understood his being in street clothes in the stands but why was Mike Cuellar sitting next to me with some sort of binder charting pitches? Didn't guys do that from the dugout? But there he sat, wearing expensive-looking shoes, shiny silver/gray pants and a mock turtleneck. That 'look' was pretty much the off-the-field 'uniform' of major leaguers back then. I got my program signed by both players and I remember having a few brief exchanges with Cuellar.

Cuellar became a favorite of mine and I was thrilled when he was dealt to my Orioles that winter even though the thought then was that the O's got snookered, picking up a washed up junkballer. But tossing that remarkable screwball he went on to become one of the best pitchers in O's history, winning the Cy Young in 1969. I skipped school to stay home and watch him beat the Mets in Game 1 of the 1969 World Series and he cemented his place in my heart with his great win over the Reds in Game 5 of the 1970 Series which wrapped up the championship for the O's. That was the same year he hit a grand slam in Game 1 of the ALCS against the Twins. Didn't pitch well that day but his slam was a huge kick for me.

While Cuellar is best remembered for his Orioles' career he began as a Reds prospect in 1959. He never made a splash with Cincy and soon was banging around in the minors with several organizations before returning to the bigs with the 1964 Cardinals.This card is his rookie card. It's a high number and a classic in my book. Love the orange frame and the pinstripe sleeveless Reds uni.

Mike Cuellar remained a member of the Orioles 'family' right up to his death a year ago next month. Rest in Peace, Crazy Horse.
Posted by Commishbob at 8:01 AM