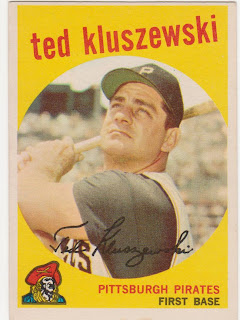 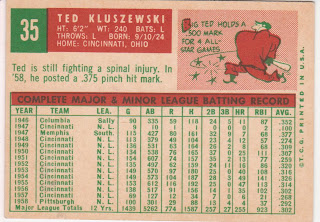 Ted Kluszewski , a.k.a Big Klu, was more than a big-muscled power hitter with cut off uni sleeves. He was also a really good first baseman. Ted led the league in fielding percentage at his position for five straight season in the mid 50s. That's a record.

But Klu was mostly known as the Cincinnati Reds slugger who would cut off his uniform sleeves because he claimed they restricted his swing. That the look made him an impressive and intimidating site at the plate was just a byproduct. Yeah, sure.

Kluszewski's numbers are often lost in the Big Guns mythology of his career. He hit over .300 in seven of eight seasons between 1948 and 1956. He led the National League in homers and RBIs in 1954 and in hits the following year. He finished in the Top Ten in MVP voting three times and was a four time All Star at a position crowded with All Stars in the fifties.

Ted Kluszewski is such a part of Cincinnati baseball history that his statue adorns the sidewalk outside Great American Ballpark there.

My copy is mis-cut top to bottom but has a nice surface sheen and good corners. It's a cool card.
Posted by Commishbob at 9:09 AM