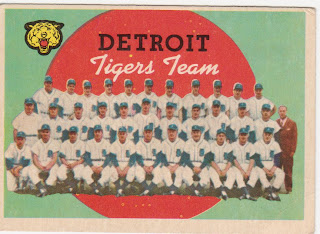 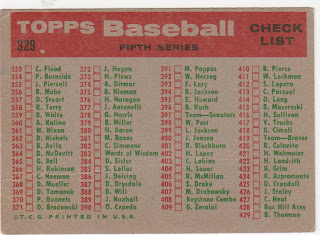 The 1959 Tigers got off to a lousy 2-15 start under Bill Norman. Norman was replaced by Jimmy Dykes who led the club the rest of the way with some success, but not enough to overcome that start. They finished fourth in the A.L., a couple of games under .500.

Outside of Al Kaline and Harvey Kuenn the Tigers were a pretty tame bunch. Eddie Yost was nearing the end of his career and Charlie Maxwell had never recaptured his earlier All Star form.

On the mound the Tigers rolled out a decent starter each day with a rotation of Jim Bunning, Don Mossi, Paul Foytack and Frank Lary. But as a staff they allowed the most homers and had the highest team ERA in the American League.

Mediocre club pictured here on a mediocre (or worse) card. The seafoam green frame and red circle just doesn't work for me.
Posted by Commishbob at 9:53 AM