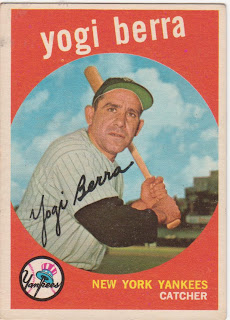 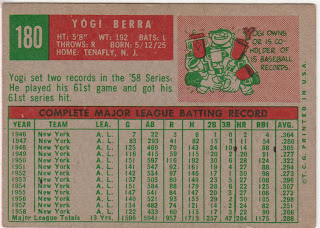 I'd be willing to bet that Yogi Berra is the only player in the '59 set has his own museum. That fact and a quick peek at Yogi's website and Wikipedia page give some idea as to why I couldn't begin to cover the details of the life and career of this Hall of Famer.

Yogi has lived in Montclair, New Jersey since his playing days. I attended high school with a couple of his nephews in Nutley, just across the Garden State Parkway from Montclair.

My copy of Yogi's '59 Topps is a far better one than is shown in the Yogi Card Gallery on his webpage. I guess that counts for something. 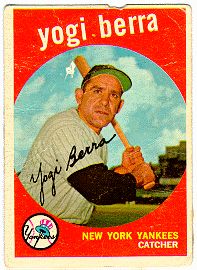 "You can observe a lot by watching."
Posted by Commishbob at 8:31 AM