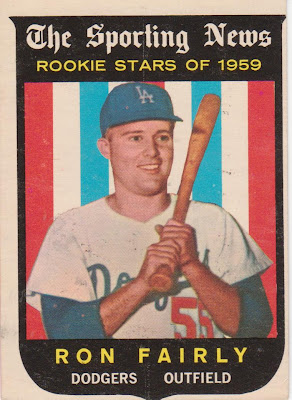 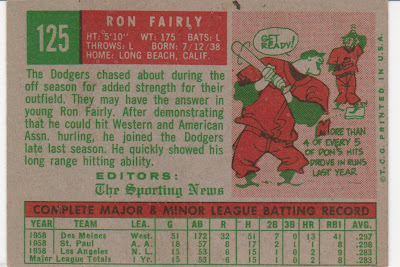 That baby-faced Dodger smiling on the card above had a lot of baseball in his future. Ron Fairly broke in with LA in 1958 and spent 21 years as a solid major leaguer and 27 years as a broadcaster. That totals over 7000 games. Now that is a full life in the game!

He won 3 World Series rings in four chances with the Dodgers and really performed in the '65 Series against the Twins batting .379 with eleven hits including a pair of homers.

Most interestingly Fairly appeared to be winding down and easing into retirement in 1977 when, after five seasons as a platoon/bench player with four clubs, he grabbed a full time spot in the Blue Jays' outfield and made the A.L. All Star team.

My copy of this Sporting News Rookie Stars card has really nice corners but displays the off centered look that seems to become common in my collection.

Posted by Commishbob at 6:06 AM