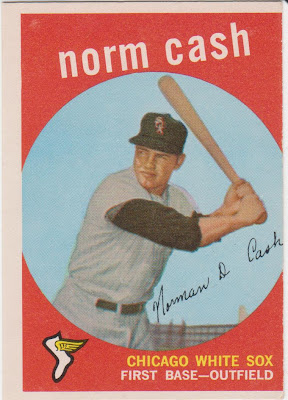 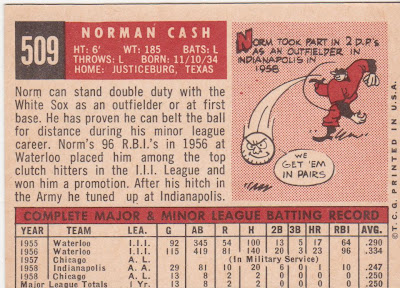 This is one of the more enigmatic cards in my collection of '59s. Norm Cash is depicted with one of those heavily retouched photos that make it appear to be 'painted'. It's in fabulous shape. Even with my mediocre scanner you can see that the corners are extra sharp, the colors perfect and the back is clean. It's obviously miscut but when you are dealing with 1959 Topps you can expect that in a lot of cases. There's a more unusual problem. You can't tell from the scan but this card may have been trimmed. When placed atop a stack of Topps cards it's noticeably narrower than those below it.

So here we have a miscut high number rookie card that may or may not have been trimmed on the side opposite the extra wide white border. And the kicker is that I bought it as a 'graded' card. It was 6.5 Excellent as graded by Beckett. I 'jailbreaked' it from the crummy cheap ass BGS 'shell' and never noticed that it was not the same size as it's brothers until I stacked it for scanning.

Having said all that I'm not too upset with it. I'm not collecting graded cards and this one looks pretty nice if you can get by the off-centeredness, so I'm O.K. with it as a part of my set. It was cheap despite being 'graded' so it serves as a "You get what you pay for" lesson.

Norm Cash was in his second year in the bigs in 1959. The White Sox had signed him after he declined an offer from the Chicago Bears to play in the NFL. On their way to a pennant that year the Sox acquired Ted Kluszewski in mid-season and Cash was a spare part after that.

The Sox dealt him to the Indians that winter but Cleveland turned right around and sent him to the Tigers before the 1960 season began. He made his mark in Detroit in a hurry hitting a pinch homer against the Indians(!) in his second Tiger at bat.

The high water mark of Cash's career came (unfortunately for him) in 1961 when he batted .361 to lead the league, slug 41 homers and drive in 132. Nice numbers indeed but the eyes of the baseball world in 1961 were mostly focused on the Bronx. Cash had some above average home run seasons before he hung 'em up following 16 seasons, but he never approached those 1961 season results again. He did play in three World Series and nab a ring in 1968.

He's well known for this quote: "I owe my success to expansion pitching, a short right field fence, and my hollow bats."
Posted by Commishbob at 7:51 AM