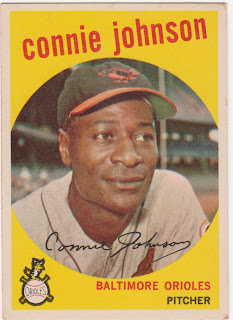 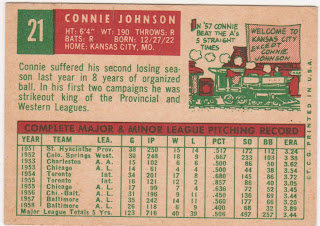 ﻿By the time this card hit the stores in Series One packs Connie Johnson had pitched his last as a major leaguer. If he doesn't exactly look like a kid in this Yankee Stadium shot its because of his circuitous route to the majors. Or maybe not. You see Johnson made his pro debut with the famous Kansas City Monarchs of the Negro Leagues at the tender age of 17 in 1939. With a break to serve in the armed services during World War II Johnson pitched for the Monarchs through 1950. Along the way he shared the mound with Satchel Paige and helped KC win the Negro League title in 1942.
After a year of pitching in Canada (Canada?) he signed with the Chicago White Sox and finally made his ML debut in 1953. He came over the the Orioles in 1957 and proceeded to win 14 games that year, his best season in the bigs.
His win total fell off to 6 in 1958 and Connie was shipped to Vancouver (Canada again!), the Orioles AAA club, for '59. After one game with the Mounties in 1960 Connie apparently could read the handwriting on the wall and took off to Mexico to pitch for Puebla for a season before hanging up his spikes for good.
Clifford "Connie" Johnson passed away in 1984 in Kansas City.
Posted by Commishbob at 7:20 AM