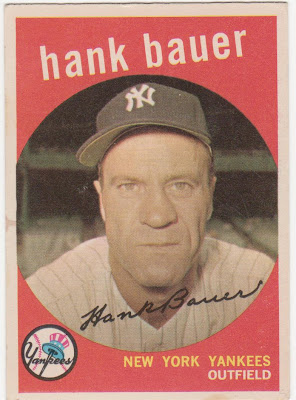 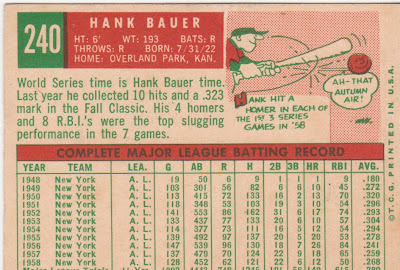 "World Series time is Hank Bauer time." Great back of a baseball card blurb, no? But World Series star was just one aspect of Hank Bauer.

He was a highly decorated Marine serving in the Pacific during World War Two, a pipefitter (looks like one doesn't he?), three time American League All Star, World Champion manager, and allegedly one of Mickey Mantle's occasional late night wingmen (and I don't mean that in the aviator sense).

Hank is also the first guy (outside of Brooks Robinson) I ever wrote to asking for an autograph. Sent him a picture just after he retired to private life and got it back signed after a few months.

Bauer played nearly all his career for the Yankees before being traded to the A's (EVERY 50's era Yankee was eventually traded to and from the A's!) for Roger Maris after the 1959 season. Typical Yankee-A's transaction. Must have been nice to be the Yanks in that era and have your top farm club actually a part of the American League.

Bauer played during the Yankees glorious 1950's decade and after retiring did a stint as manager in Kansas City. He ended up managing the Orioles beginning in 1964 and led them to their 1966 title with a sweep of the Dodgers. For this, and his service to this country, Hank Bauer is a real hero to me.

The New York Times had a nice obituary following Bauer's death in 2007. Worth a glance.

My copy of this Bauer card is really nice, glossy with fairly sharp corners and well centered to boot. You have to trust me on the latter point, my scanning abilities let me down and I chopped off a piece of the back of the card as you can see.
Posted by Commishbob at 7:26 AM