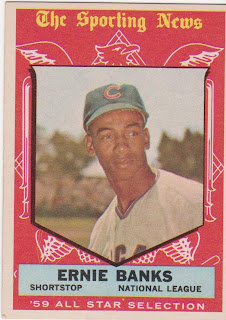 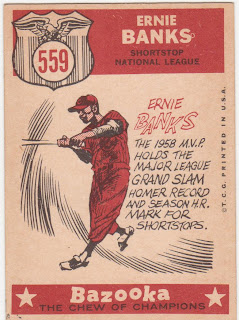 These All Star cards make up the last 22 cards in the '59 set. Each league is represented by the League's manager, eight position players and two pitchers, a lefty and righty. The American Leaguers have blue frames, the Nationals are red, as seen here.

This Ernie Banks is the first one to be posted here and it's a real beauty (if you can ignore one tiny corner crinkle and my lousy scan).

I looked into the selections for this subset thinking that since it was in the last series these might have been the actual All Star selections for 1959. Looks like most of them played in at least one of the two 1959 All Star games. Curiously Wes Covington (#565) is part of the subset but never once was an All Star according to Baseball Reference. He's not listed on the roster even as an injured and replaced All Star. Beats me.
Posted by Commishbob at 1:39 PM