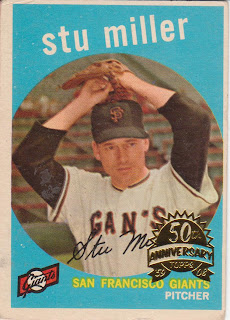 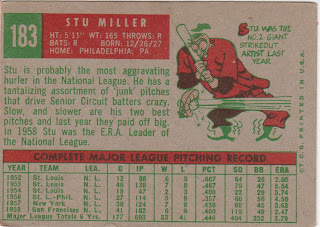 This card of Stu Miller was a gift sent by Joseph who is a fellow Houston area golf enthusiast as well as a poster on a golf message board we both frequent. It's unique and very welcome in my collection. I don't have much knowledge of recent Topps cards or programs so I was not aware of the 'buyback' nature of the card. I did some digging and it appears that the program is just what you'd expect... Topps 'bought back' cards of interest from their 50 years of history, applied a gold embossed 'stamp' and included them as premiums in packs of current cards. Joseph mentioned pulling this one from a 2008 Topps Heritage pack so I know that these were put out at least in that year. More than that I'm unsure of. Thanks again to Joseph for the gift. Now on to a bit about Stu Miller himself.


Stu broke in with the 1952 Cardinals and pitched for five clubs. He ended his solid career with a two game cup of coffee on the 1968 Braves. Along the way he was a reliable reliever and contributed mainly to the Giants (in New York and San Francisco) and the Orioles. He pitched for a couple of World Series clubs, the 'Giants in '62 (loss) and the O's in 1966 (WIN!!!).


He was a junkballer whose pitches sometimes crossed the plate in the vicinity of 55 mph. As the back of this card attests his 'speed' was quite an issue among opposing batters and some of their quotes are quite amusing. Miller's biggest moment in the spotlight came in the first 1961 All Star game in San Francisco's Candlestick Park. Miller tells the story on this website better than I could......


“He called a balk on me. I tried to explain to him that the wind forced me to move. He said, ’I know it, but rules are rules and I’ve got to call it.’ The umpires knew it was some serious conditions out there. But, I made a balk - a simple balk.”Boyer committed another error (throwing the ball into right field) to allow Nellie Fox to score the go-ahead run from first base in the top of the 10th. But, the National League won the game in the bottom of the inning on singles by Hank Aaron, Willie Mays, and Roberto Clemente. Miller, therefore, was the winning pitcher.“But, the next day, that’s not what you read in the newspaper,” Miller said. “The biggest headlines they could get read ’Miller Blown Off Mound.’ Never mind that we won the game; that’s what they decided to run with. They made it sound like I was pinned against the centerfield fence, for crying out loud!’Miller struck out Tony Kubek, Dick Howser, Jim Gentile, and Maris in his 1 2/3 innings of work.

Posted by Commishbob at 1:02 AM