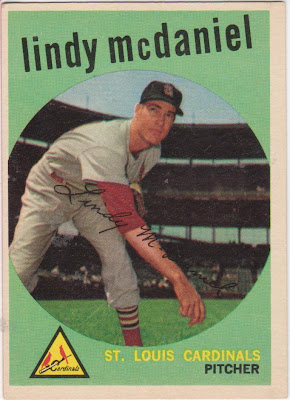 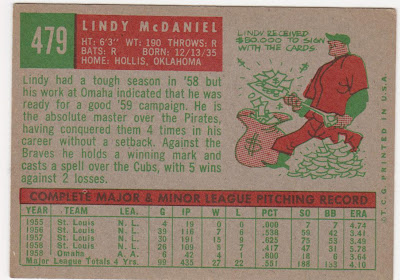 One of the best regular season games I ever saw involved Lindy McDaniel. I watched the Orioles and Yankees on July 8 of 1970 with my Dad on t.v. My O's were starting to put the Yanks in their rear view mirror and were coming off a dramatic 10th inning win the previous night. Brooks Robinson's bottom of the 10th grand slam had beaten, yup, Lindy McDaniel. I'd listened to that one on the Orioles radio network which, if I turned my portable Panasonic the right way, came in pretty darn clear in the kitchen of our house on the central New Jersey coast.

But the game in question was even better. The Orioles jumped out to an early lead with a three run first in Memorial Stadium. Don Buford had led the game off with a homer and Frank Robinson had driven in a run with the first of what would be four hits on the night.

The Yanks tied it and took a lead of 4-3 quickly enough, the highlight of the comeback a three run shot by Thurman Munson off Dave McNally. But the seesaw tilted back when Boog Powell and Frank Robinson blasted back-to-back shots in the bottom of the fourth! Jump ahead to the top of the 8th and the Yanks had edged back to trail only 6-5 and then broke out with homers from John Ellis and ex-Bird Curt Blefary. Now it's 8-6 New York in front and I'm pissed.

Lindy McDaniel is working his second inning on his second straight night in a tight game. Frank Robinson, never one to let a tense situation slip away with doing something special, drills his second homer of the evening to lead off the 9th and it's a one run game again. Then Brooks Robinson and Dave Johnson single and I remember that I cannot sit down any longer. With Bobby Grich running for Brooks, Andy Etchebarren walks to load 'em up!

Now Terry Crowley steps up to pinch hit and McDaniel buckles down. He fans Cro on three pitches. Ellie Hendricks pinch hits for the pitcher and McDaniel FANS HIM ON 3 PITCHES! So Don Buford steps up hoping to end the game just like he started it, with a bang. McDaniel gets him down 0-2 and now has gone from a bases loaded jam to just needing one damn strike with 8 straight strikes. Holy crap. Then, dramatically, Buford strokes the next pitch into right field, Grich and Etch score and the neighbors can't figure out why I'm screaming. Birds win, 9-8.

That's a long involved story but one I love telling. I brought the game up to Earl Weaver in a conversation I once had with him and after about a sentence and a half Earl took over the re-telling in his unique and colorful style. Good times.

McDaniel, in 1959, was coming off the only two seasons in his two decade long career that he served as a full time starter. He was pretty effective in 1957 with a 15-9 record but slumped in '58 and the Cardinals moved him to the pen. McDaniel jumped right into the role, leading the league in saves in 1959 and 1960. He went on to a long and satisfying career totaling 1972 saves to go along with his 141-119 record. He retired after the 1975 season having played for the Cubs, Giants, Yanks and Royals in addition to the Cards.

Oddly McDaniel never pitched in a postseason game despite 21 years in the bigs. He has his own website these days. Lots of Lindy related material there and it links to his blog (how cool is that? A blog!) that he updates monthly that features "short articles on baseball and religion."
Posted by Commishbob at 6:23 AM