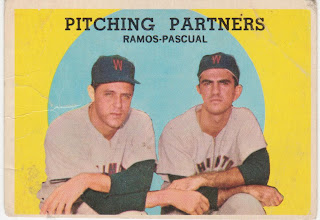 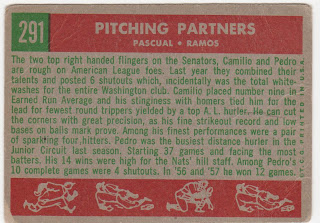 Wait, I just noticed something... Topps misspelled Camilo Pascual's name AGAIN! The back of this card refers to him as 'Camilio'. On his regular card (which was already featured here) he got the 'Camillio' treatment. This is just silly.
Pedro Ramos proves that my memories are far from accurate sometimes. I always think of him as a reliever and yet he had only two effective seasons out of the pen and those came after eight season in which he was primarily a starter for the Senators/Twins and Indians. He pitched in a heck of a lot of games over that span and had the dubious 'honor' of having the most losses (or being tied for most losses) for four consecutive seasons, from 1958 through 1961. Dragging yourself out there every four days for a crappy club, and getting some bullpen work as well will do that to ya.
One memory I am sure of is my Dad referring to him as 'Pistol Pete' during his Yankee tenure in the mid-60's.
This is another of my lesser condition cards in this set. There are some, like my Bob Gibson, that I intend to upgrade some day. I can't see myself worrying about this one.
Posted by Commishbob at 9:57 AM